The NDGSA is honoured to have Ellen Dorsey from Dill's A Little Goat Farm and Sarah Hawkins from Castle Rock Farm Nigerians as Ambassador of the Society. Ellen and Sara are highly reputed and successful breeders whose bloodlines are amongst the first imported genetics into Australia and they have taken an active interest in the development of the breed in Australia. We thank Ellen and Sarah for their support of the NDGSA and Australian breeders. 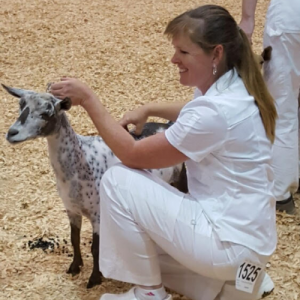 In 2002, I was looking for some small, portable weed eaters to help with some habitat restoration work. I liked the size, proportionality, and colors of the Nigerian Dwarf, so I found a breeder within driving distance to get a couple of goats from, and she asked me if I just wanted pets, or if I also wanted a show animal. I had shown dogs, and thought “why not give it a try?”

I went to my first show a few weeks later, which was quite fun, and everyone was so kind, friendly, and helpful that I was hooked. I tend to be a competitive person, so I spent the next several months researching bloodlines, and started looking for a property where I could build my herd. The day we signed our paperwork for the farm, I owned two goats. By the time we moved in, three months later, I owned ten goats!

At the time I got into goats, they were my stress relief from my job, which involved dealing with the general public a lot. When that job came to an end, I started a farm based business and continued to work on the goat herd full time. While public policy had been my main focus, working on the farm and participating in farmers markets led me to learn much more about all aspects of agriculture- both animal husbandry and soil quality and how it effects crops of all sorts. When I obtained my first goats, there weren’t many veterinarians who knew much about them, so I’ve learned how to do almost everything myself, short of surgery.

I’ve met some of the best people through having goats- I’d say 60% of why we go to shows is to see our friends, and often our strongest competitors are also our closest friends. I wouldn’t have stayed in goats this long if it weren’t for this and the way we help each other during the off-season from shows. The goats have sort of taken over our lives, but we also know that they keep us active and moving- I often walk several miles a day just getting chores done, and we love the fresh milk, yogurt, and cheese supply. We compost everything we take out of the barn to feed our soil, especially in our garden area, to supply ourselves with produce.

I’m most proud of the fact that I’ve produced more finished champions with my herd name than anyone else in the country- over 50 to date, and of course, producing two National Champions (I’ve only shown at two National shows). 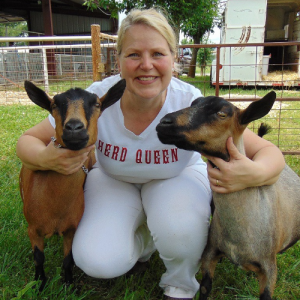 Our herd began a little over 20 years ago with a different husband and a pair of enthusiastic young boys. The herd has survived a divorce, remarriage, the growing up and moving out of those two boys and the arrival of another pair of boys. Not only did the herd survive the changes, but it thrived!

We’ve owned a number of breeds over the years; currently we own Nigerians, Alpines and Toggenburgs. The Nigerians have always been the heart of our farm with the standards coming and going as the mood strikes. We participate in Linear Appraisal and continuous milk test, though we took a break from milk test in 2019 due to sheer exhaustion.

One of our herd goals this year is to get back to our regular testing schedule. Milk test is not difficult, however, when you really must slow down a little, never feel guilty about it!

My main focus has always been the mammary system. A wise person once told me General Appearance was easy. You can fix that in one generation… it’s the mammary that is hard to stamp! I took that piece of advice to heart and found that if I focused on mammary, the rest sort of followed through—form follows function.

My husband Chris is our “operations manager” while I do the milking, baby feeding, and general doctoring. I like to tell him “he builds the operation, I build the goat”. We enjoy our animals, and I believe it shows for how happy, friendly and healthy they are! 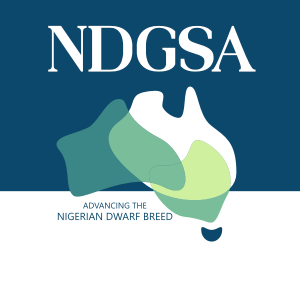